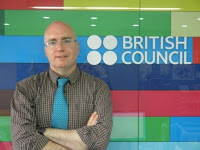 This is a guest post written by Lee Shutler. Lee is currently working as Academic Manager for the British Council in Incheon, South Korea. He has an MA TESOL from Canterbury Christ Church University and a DTEFLA (now the Delta) taken on a course run by Sue more years ago than she cares to remember. He has been a teacher and school manager for 20 years in Italy, Japan, Korea and the UK. His professional interests include materials creation and helping a student develop as a person not just as a language learner.


It’s funny. In class we get the students to talk to each other – to communicate with each other, usually in groups of 2 or 3. We tell them that this is the best way for them to improve their communication skills and to develop in a classroom environment. Usually, even the most “high maintenance” of students accepts that this is probably the best way forward for them and adult classrooms across the world echo to the sounds of pair work and group work conversations.

Why, then, do we usually get students to do written work where, we, the teacher, become the only audience? If we truly believe that students sharing ideas with their colleague and partner in the spoken form is the best way for them to develop speaking skills, why not with writing, too?

I would, therefore, like to suggest the following activity.

Step one: the students are paired up – either randomly, or through the class list. Not, however, with the person sitting next to them.

Step two : the teacher asks the students to write a letter to that person. The topic can be about anything they wish but there must be some information sharing involved in the letter. Tell them they have about 20 minutes to write.

Step three : the students give the letters to you, the teacher/postman(woman), and you pass the letter on to whom it is addressed.

Step four: the addressee reads the letter and replies in kind – again they need about 20 minutes for this.

Step five : you act as “postperson” again and pass the letters back to the original writer.

In the early stages, you act purely as the facilitator. At this stage, do not read or correct the letters. Watch for the students’ body language. You will never have seen students read something so eagerly in class as they do these letters. The smiles will also be a clue, as shared private jokes and ‘in’ gossip get passed around. Your knowledge of the students will help you to decide whether such freedom is ‘safe’. A lesson with prison inmates may not be the best place for such an activity. There you would need to have more control both on subject matter and monitoring.

Most students are proud. They will not want to produce a piece of work that looks scruffy, badly written etc., especially if it is being read by their peers. They will want to be judged by them in a more positive light than they would like you to judge them. Peer pressure is a serious thing!

In order to avoid any form of “cliquiness” developing, I would recommend this activity be done with a variety of pairings over a period of time.

Initially, I steer away from marking (or even reading closely) these letters. There may be things in there I do not wish to see! However, once students have the idea of the activity, I do warn them if I intend to read or correct their work. This allows them to exercise some measure of censorship. This is similar to when they are doing a speaking activity. Students will often modify what they say and the way they say it when the teacher is in earshot.

Through this activity, students will rediscover an innate desire to communicate through the written form. It makes the act of reading and writing more interesting and more enjoyable. It is interesting to note that in this world of texting and email, students still need to be given practice at writing. I found that this is an example where innate L1 language and communication skills do not necessarily transfer in to L2.

Obviously students need to be able to write more than just semi-informal notes to their friends. However, this activity does help students focus on the notion of ‘audience’. They do want to produce something that the reader will want to read. This will then spill over more naturally into the types of activities they may have to do for a PET or FCE type writing activity. Again, it is a skill most students will probably have instinctively in their own language – but not necessarily in L2 or L3.

This activity has worked for me from an Upper Elementary level upwards. I have done it with teenagers and with adults and have seen normally quiet, reticent students enjoy the freedom of being able to express themselves. Very often the correspondence will continue after the class – through emails or through texts. Teenagers especially, so often mono-syllabic mumblers, can find a ‘voice’ through a non-threatening activity that can allow them to express their feelings without the fear of being judged. For teenagers, this may become an activity that can develop into wall-charts and displays. A group I once had in Korea turned their letters into a display that looked like a giant I-phone screen. It was very impressive and far more imaginative than I had anticipated!

As a variation, you might like to ask them to email each other overnight and then get the emails printed out at school. If students are wary of passing on email addresses, it is easy enough for them to set up a temporary address or even a class group. At the British Council in Korea, we have set up a class portal for all adult classes so that students can interact with each other if they wish.

In conclusion, I also say to the teacher – here is an activity that can take up to an hour of total student involvement which requires very little preparation! It is intense with student activity and rich in productive language. Now that, on its own, makes it a winner!

(Don't forget that Amazon will often have both new and used copies of the book you want at prices much lower than those you see advertised here. it's always worth checking out).