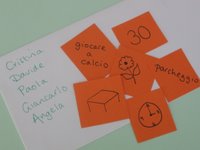 This is a technique I’ve used with adult beginners in monolingual classes who are following a non-intensive course meeting once a week. It aims to help them assimilate the new vocabulary taught in the lessons.

If you have a large class, divide them into groups of about five or six. Give each member of each group an envelope with the names of the people in the group listed on it. The names must always be listed in the same order.

Tell each student that, for homework, they should choose ten words or expressions from the lesson just taught, or the unit in their course books, which they want to remember. Ask them to get a piece of thin card, to cut it into small squares (3cm x 3cm is about right) and to write on one side of the square one of the words or expressions. On the other side they should either draw a picture of the object or write the translation of the word. The photo shows some examples of the “meaning” side – on the back would be written a flower, car park, It’s three o’clock, thirty, play football, a table.

Ask them to keep the cards, in the envelope, in their bags or pockets all week. At least twice a day they should take them out and look at them, looking first at the side with the picture/translation and trying to remember the English before checking the answer. This shouldn’t take more than two minutes, and can be done at moments when they have nothing else to do – for example when they’re waiting for a bus.

The next week they should bring the envelope, with the cards, to the lesson and pass it to the next person on the list. (The last person passes it to the first). They now have an envelope with ten cards, not necessarily the same as the ones they chose the previous week, to which they should add ten more cards with words from this week’s lesson. They now have twenty words to study during the week.

In the following weeks the same thing happens. They pass on the envelope to the next person on the list, and add ten more words. After five weeks (presuming groups of five) each envelope will contain fifty cards, and will return to the person who put in the first ten words. That week, and every week from then on, each person takes out the ten words she or he had previously put in, before replacing them with another ten.

In this way, students are constantly recycling words from previous lessons, and because they see the words that other people have chosen, get maximum exposure for the minimum of effort – they only have to produce ten cards per week, but are constantly working with fifty. The activity also helps to increase group cohesion, and to give students a sense of shared responsibility for the progress of the group.

The activity has provoked generally positive feedback from the students who’ve used it. “Useful” “easy to do” and “interesting” are some of the comments. Some students have pointed out, however, that it can be counter-productive if other students are inaccurate in what they write on the cards – writing the wrong meaning or, more usually, making spelling mistakes. This can be avoided if, as the students come into class, they lay out on the table the cards they have made. The teacher can then quickly check them whilst the others in the group are still arriving and settling down, and the students can redo any with errors. This uses the first few minutes of the lesson productively, even if there are latecomers, and resolves the problem.