In a previous article, I talked about correcting workbook-type activities and suggested that students could be taught to self-correct effectively – thus saving the teacher’s time and promoting student autonomy. However, when it comes to freer written activities the situation is different – there is no single right answer and the text must be seen by the teacher. How can the text be marked most effectively ?
The aims of a marking method for open-ended written activities remains the same as before : to encourage the students to use the corrections as a tool for learning. This means helping them to “notice” what the errors are, to self-correct where possible, and to increase their understanding of areas that previously confused them.

To do this, try the following steps : proof-reading; guided self correction; comparison with a corrected version; follow-up work.

If they are working on the computer, the students can, and should, be encouraged to use the spelling and grammar check. Suggest that they don't have this set to make automatic changes - which they may not even notice - but run the programme when they finish so that they also see the explanations. However, make sure they understand that the spelling and grammar programmes are not foolproof - they won't, for instance pick up on a mistake like We were in there garden - and that in any case they need to proof-read. Proof-reading does not mean reading the text through quickly immediately after it’s been written – you are too fixed on what you wanted to say, and simply don’t see the mistakes. It means leaving the text aside for a while, then looking at it again in detail – looking at every word and asking yourself questions about it. This can be taught to the students in class. After the first piece of work has been marked, ask students to analyse their errors. Ask for example how many people forgot the third person –s, forgot the plural –s, didn’t put the object immediately after the verb, forgot to use capitals for nationalities, etc. What you focus on will vary depending on the students’ level, their L1, and what you’ve been teaching recently. Write each type of mistake on the board plus the number of students who made it, to provide a ranking of the most common errors, and ask the students to copy the list down. Don’t make it too long. Explain to the students that from now on, you want them to look at their work again at least 24 hours after they’ve first written it, and look actively for two or three of those mistakes – the ones they know they make most frequently. At the end of the text they should note the date it was written, the date it was proof-read and the specific things they looked for.

If you can, ask students to send you their work via E-mail. Correct it by highlighting the errors and adding a code to indicate the type of mistake – for example Sp = spelling mistake; G = 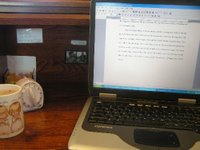 The students will need a copy of the code – I usually cut and paste it at the top of their text before I send it back. Distinguish between errors and mistakes – a mistake is a slip, something the student knew but didn’t use correctly, while an error is something they don’t fully understand – either because they’ve misunderstood it or they’ve never met it before – and for which they need an explanation and practice activities. Put a number next to these errors.

When they see this, the students’ first task is to look at the highlighted expressions and the code, and to try to self-correct, not bothering too much for the moment about the errors which have a number next to them. You may want them to do this before they see your corrected version, asking them to write their corrections on the text and bring it to the next lesson, when you’ll give them the “answers”. This is useful the first time, while you are teaching the students the method, but afterwards will depend on how much you “trust” them to do the work.

Step Three : Comparison with a Corrected Version
The next step is to produce a corrected version of their text, against which they can check their hypotheses. If they have tried to say something which is way above their current level of competence, you can simply rephrase it to show them how they could have expressed the same idea within the limits of the language they already know.

Step Four : Follow Up Work
At the end are the notes which relate to the errors, and which provide the students with a brief explanation and (possibly) a practice activity. If the students have a grammar book, this is one way that it can usefully be used. For example, if the students are using Murphy’s Essential Grammar in Use (CUP) the note might say : 1) "Who" is used for people and "which" for things. Look at Murphy Unit 112, paragraphs B and D only, and then do exercises 112.3 and 112.5.

You may also want to develop your own materials. This can be very time-consuming at first, but as long as you keep everything filed on computer, the activities can be used over and over again. They will build up even more quickly if you collaborate with other teachers in the school to build up a shared pool of resources. Quite a lot of the activities that you’ll see in the Language Snippets section come from the bank of the explanations/exercises which I’ve built up over time.

Time is, of course, the problem with this approach. If you have a lot of large classes you may not be able to work in this way all the time but will need to prioritise. You might want to give priority to students who have an important exam at the end of the year, or who are focusing specifically on writing skills. If your classes are smaller, you can organise the work so that only one or two classes are doing this type of writing each week, while the others are working on exercises which can be entirely self-corrected.
Should you correct every mistake?
What do you do with a piece of work which contains a large number of mistakes and errors? Will it be demotivating for the student if you indicate them all? Or will the student feel insecure if s/he knows that there are still uncorrected errors? Will the students be able to focus effectively on all the errors, or will the overload be counter-productive?
The answer to these questions will depend largely on the personality and motivation of the students, and whether they see your corrections as an evaluation (a product-based approach) or as a learning opportunity ( a process- based approach). The steps which I've outlined above are intended to encourage the latter, but also provide the possibility of a compromise between the two positions. If, on the original version, you indicate only those errors/mistakes which you feel the students will be able to focus on but in the corrected version provide extra changes, they are not faced with a demotivating mass of corrections, have a limited number of areas to focus on, but at the same time are not left with uncorrected errors which they might assume to be correct and later repeat.

Photo provided under Creative Commons Licence by Melisaur via flickr.