Fall Off or Fall Down ?

This is the first in a new series Language Snippets. It will focus on "small" areas of the language which are not always explicitly covered by textbooks, but which often puzzle learners. Teachers whose mother tongue is not English may find the section interesting for their own language improvement, while both they and native speaker teachers will find it a useful source of explanations and exercises for use with their students. Let us know if you have any suggestions for areas to be included.


The word used after the verb fall depends on the previous position of the person or object that falls or the direction of the fall. Look at the following examples :

The bottle fell off the table. / My purse fell out of my bag.

The bottle was on the table. It fell off.
My purse was in my bag. It fell out. 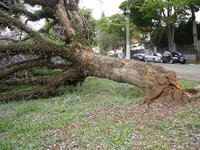 Down is used when the direction of the fall is specified, or to mean “fell to the ground” :


To mean “fall to the ground” or “fall from a vertical to a horizontal position” you can also use fall over :

John fell over and hurt his knee./ A tree fell over in the storm.

Check your understanding with this exercise. What’s the missing preposition?

(It's always worth checking links to books on Amazon, even if they seem hideously expensive. They often have other new and used copies at much cheaper prices.)