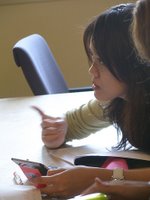 This activity uses music to promote group discussion and is suitable for intermediate students and above. It asks students to visualise the scene that the music which they hear suggests to them, and then report back to their groups. Not everyone finds this easy at first, so you may find it is more successful if you do it in stages - a guided version of the activity a few times at the beginning of the course, passing to the freer version only once they are used to the technique.

The music you use should match whatever you want the students to visualise. New Age music usually works well, but what you choose will depend on what you have on your shelves. I have often used artists like Kitaro (Silk Road); Rick Wakeman (Country Airs); Vangelis (China); Santana (Caravanserai). It is however extremely important that whatever you use evokes a positive, happy or relaxed mood. Avoid music that might evoke negative feelings, and emphasise to students that you want this to be fun. If they start to be drawn into a negative visualisation, they should stop and opt out of the activity. They will still be able to participate later by listening to and asking questions to the others.
Phase One : Guided Visualisation
Play the piece of music you have chosen to the group. Encourage them to shut their eyes, or if this makes them feel silly, just to look down at their desk and concentrate on the music. While they listen, speak to them guiding them through the visualisation. Speak slowly, leaving pauses for ideas to come. What you ask them to visualise can be linked to the language you have just been teaching - this example could, for instance, fit into a class which has recently focused on food vocabulary :

Listen to the music ... and as you listen I'd like you to visualise a scene... You're on holiday and you're feeling really good ...You are feeling happy and relaxed. It's one o'clock and you're having lunch. Where are you? In the mountains? At the sea? In a town?... Are you in a hotel? In a restaurant ? Or somewhere else? ... Is it noisy or quiet? What can you hear? ... And what can you see around you? ... Are there any other people there? ... Are they with you or are you alone? ... The food is really good. Taste it. What are you eating? ... Are you at the beginning of the meal or at the end? ... What have you already eaten and what is still to come? ... Are you feeling hungry or are you already full? ... What are you going to do after lunch?...

Script the prompts before the lesson - don't try and ad lib - making them very concrete the first time you do the activity, and more open on subsequent occasions, for example by asking simply Where are you? rather than giving options.

At the end of the visualisation, fade the music out gradually to "bring them back" and then put them into groups of three or four and ask them to tell each other where they were, what they could see around them, what they were eating etc etc. Monitor while they speak, noting on the board any language that you want to bring their attention to later. When they finish, ask two or three students to describe their scenes to the whole class and give feedback on the language which you overheard.

Once students are used to visualising, tight guidance becomes unnecessary and you can pass to a freer activity.

There are two versions of the activity described below. If you have sufficient space, electric points, numbers of CD players, headphones etc try the first version. Otherwise, try the second.

Photo provided under Creative Commons Licence by brookesb via flickr