Where Do They Sit?

The way the students are seated in the classroom will often determine the dynamics of the lesson. We’ve already seen in a previous article how a simple change in the seating pattern can make an incredible difference to group coherence and student satisfaction, and I’ve seen many other cases where seating has been a crucial element in the success or failure of the lesson.

The seating pattern you use may, in some cases, not be fully under your control – if for example the desks are fixed to the ground or the school has strict rules about not moving the furniture. Student numbers are also going to be an issue – EFL groups can be anything from one student to four hundred. However, except in extreme situations, some degree of choice is usually possible.

For the moment I’ll talk about average size classes – anything from 6 to 25. Teachers have different preferences for seating arrangements – groups seated round small tables is often one. This is probably the best option for the larger classes in this range, but for smaller numbers and with adult or teenage students I prefer the horseshoe shape, which I find has all of the advantages of groups, and none of the disadvantages. A horseshoe may be desks in a U-shape with a hollow centre, students in a semicircle on chairs with arm-rests and no desks, or students seated around three sides of a large table, with the teacher at one end.

In any case, whatever seating pattern you choose or is imposed on you, the class is likely to be more successful if you keep the following principles in mind : 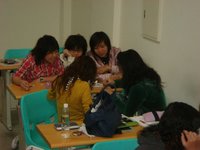 What do you do if you’re working with students seated in rows, possibly with desks fixed to the ground? In a typical classroom set-up, alternate rows can be asked to turn their chairs around in order form groups with the people sitting behind. Or they can be asked to stand up and do the activity on their feet, moving around as necessary. In a lecture theatre type arrangement however, very often it is not only the benches but also the seats which are fixed, and the students are “trapped” inside the rows. In this case, change pairwork partners by a 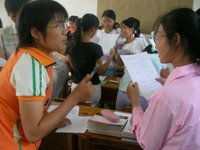 sking the person at the far end of each row to stand up, and the whole row to move one seat to the right. The person standing then moves round to the empty seat on the far left, and new pairs can be formed.
So far I've talked about the teacher deciding, but what about students' preferences? Should they be taken into consideration?

Bear in mind that students often prefer what they are used to and will resist change. If they have always sat in one position, they will have established a psychological "territory". The room will feel right from that position, and they may feel uneasy in another. This is why I suggested in an earlier article that the first lessons with a class are often crucial - if the students get used to the seating pattern that the teacher has chosen, or to changing seats frequently, from the beginning they are much less likely to resist than if a change is made half way through the course.

Whether students choose their own position or not will also depend on the reason. One student may not want to sit near the window because of draughts for instance, or as close as possible to the board because of sight problems. The teacher needs to be aware of these factors and take them into consideration. However, the most common reason for choosing or avoiding a seat is often who their neighbours are, and this - who do they sit with? - is something that can have an important effect on the success or otherwise of the class. It's a question that deserves to be considered at length and is something we'll look at in the near future.