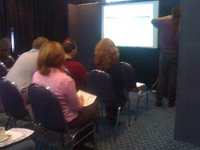 In the first part of this article we saw how the success of an on-line course could be affected by at least two factors – the quality of the materials provided and the attitude of the students following the course. One way of solving the second of these problems is to use a Blended Learning approach.

In blended learning, the on-line course is not used in isolation, but as one component of the course. It may or may not be the major component, but in any case is backed-up and supplemented by other methods of instruction – face to face teaching, “pen and paper” activities, or whatever. The exact mix of components and types of instruction can vary from situation to situation, making the approach very flexible in terms of student needs and wants, available budget etc. Some examples of the way we have organized blended learning courses for company clients are :
However the courses were organised, certain aspects remained the same, with the aim of preventing or at least minimising the problems which I diiscussed in the last article :
There are students, of course, who do not need all this back-up. Students who like studying on-line and are already effective autonomous learners can often be left to “get on with it”. In fact they are more likely to swamp the tutor with more e-mails and phone calls than s/he can cope with than to need constant monitoring. However, in our experience they tend to be a minority and usually at a fairly advanced level. Many students, especially beginners who are new to language learning, need the help and support of a tutor and a structured and integrated course if they are to succeed and gradually to develop the skills which will allow them ultimately to become autonomous learners.