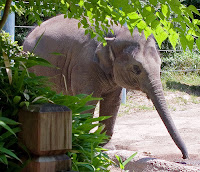 Here's a fluency activity that I've used for years and which I find works really well. I can't remember where I first heard of it, so if anyone knows the source please let me know so that I can acknowledge it. It works best with intermediate and upper intermediate students.

Divide the class into groups of three or four. Tell each group you're going to tell them an object, and they have to decide why they need or want it, and what they would do with it if they had it. Tell them that you will "give" the object to the group that comes up with the best reason. If possible have pictures of the objects so that you can physically "award" the prizes.
Usually this activity takes off after the first couple of objects, as the groups realise that they need to be imaginative to beat the other groups, and that the weirder their ideas the better. If you want to, you can follow it up by naming a final object and asking them to write their reasons for wanting it for homework. Depending on the size of the class, they can either give these to you and you read out the best in a future lesson, or (with a small class) they can all explain their ideas in the next class and vote for the best.

Photo provided under Creative Commons Licence by pfly via flickr