Have Got : Part One

Don’t make the mistake of thinking that have got is a strange form of the verb have with a meaningless word (got) added on. It’s not. Have got is the present perfect of the verb get.

The meaning of get was discussed in a previous article Getting to Grips with Get. If you’ve not read it before, or don’t remember much about it, read it again now, as its arguments are crucial to understanding the meaning of have got.

In general though, I argued that the verb get is used to describe a change. This may be :

c) a change in possession : I got an E-mail from John yesterday; Can you go to the shops and get some milk. Get here has the general meaning of obtain, and may be used to replace more precise verbs such as buy, fetch, borrow, receive, steal etc: So :

2. What does the present perfect mean?

In English, the present perfect is formed with the auxiliary verb have plus the 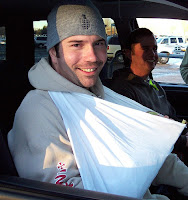 past participle. One of its uses (the others are not relevant here) is to describe the present result of a past event. For example :

Have got can be used with any of the meanings of get listed above with the meaning of present result of a past event :

but here we are most concerned with :

The literal meaning of I’ve got a new car is therefore I have “obtained” a new car – ie bought or received it as a present.

If you have “obtained” something, then the present result is that you now possess that thing. So :

I’ve got a new car = I possess a new car

Another verb with the same meaning as possess is have. So :

If have got is an ordinary present perfect verb, this means that the main verb in the expression is got (past participle of get) and have is simply the auxiliary, with no meaning of its own. In English, it is the auxiliary verb which is used to form the negative and the interrogative. So :

On the other hand, in the sentence I have a new car, have (meaning possess) is the main verb. Main verbs cannot form the negative or interrogative in English, and in the simple form (when there is no auxiliary already in the sentence) need to add the empty auxiliary do :

The only standard exception to this is the verb BE, which follows the rule for auxiliary verbs even when it is a main verb.

Similarly, it is generally only auxiliary verbs which can form contractions in English – again the one standard exception being the verb BE.

The verb have is sometimes an exception to these rules, however. Some native speakers, especially in certain regions or of the older generation, do regularly form the interrogative and negative of have as a main verb as if it were an auxiliary. The novelist PD James is a good example. Here are some sentences from one of her novels, Death in Holy Orders :
I’ve a bit of a conscience about Ronald / Had he anything else to say? / As far as I know he hadn’t a key. / We’ve our own black cloaks / I haven’t the time to go asking around

In particular the contracted form is commonly used in various “set phrases” such as I’ve no idea or I’ve a feeling that … These are however exceptions to the general rule.
How does this relate to expressions such as I've got two sisters or She's got red hair? And how can you best present the use of have got in the classroom? We'll look at these issues in the next part of this article.
Acknowledgements
Photo provided by Jonnyalive under Creative Commons Licence via flickr