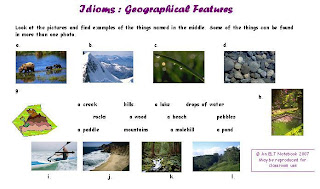 Here’s another activity in our series on Teaching Idioms. This time it focuses on idioms referring to geographical features.
Quite often, idioms are fairly transparent in meaning. They involve a metaphorical use of language which it’s not difficult to understand in context as long as you know the literal meaning of the words. And this is often the main problem for learners – they have to cope at one and the same time with learning both the words contained in the idioms, and their idiomatic meaning.

When teaching idioms then, you often need to divide the activity into two stages and look at lexical meaning before presenting the idioms themselves. This activity, which looks at idioms referring to geographical features, does just that. The students have a handout similar to the one in the photo and are asked to match the objects in the pictures with the words in the centre.

Of course, given that you would probably be using this activity at an upper intermediate level or higher, some of the words in the idiom would already be known – they shouldn’t have much difficulty with mountains, ocean or wood for example. These are included in the preparatory exercises mainly to ensure that they will get at least fifty per cent of the answers right, and secondly to help them work out logically the meaning of some of the others : if they know hills they are halfway to recognising molehill.

Once the words have been checked, they can then be asked to infer the meaning of the idioms from contextualised sentences. This is made easier if they are given a set of synonymous expressions to match to the idioms, as below, or they can simply be asked to try and guess what the idioms mean.

Look at the nine underlined idioms in sentences 1-8 and match them with the correct meaning a-i.

1. I don’t know why you let David be so rude to you. If I were you, I’d tell him to go jump in the lake.
2. The company is on the rocks and will probably go bankrupt.
3. I’ve been offered two jobs and I don’t know which to take. One’s for a multinational – I’d only be an assistant manager, but the money is good and so are the career prospects. In the other one I’d be the boss! But there are only six employees - I’d be a big fish in a small pond. I’m not sure if it would lead anywhere.
4. I get really annoyed when I see my staff sending E-mails with spelling mistakes. They think I’m making a mountain out of a molehill, but I’m convinced it’s bad for our company’s image.
5. Although the country receives a certain amount of foreign aid, it’s only a drop in the ocean.
6. Trying to convince Geena that the proposal was a good idea was an uphill job! She was so focused on the cost that she couldn’t see the wood for the trees.
7. He invested all his money in one company and then of course, when its shares crashed, he found himself up the creek without a paddle.
8. Linda thinks she’s indispensable and that we couldn’t cope without her. But she’s wrong. If she goes on like this I shall fire her and get someone else. She’s not the only pebble on the beach.


a. the only person available
b. a small amount in comparison to what’s necessary
c. to go away and stop being unpleasant
d. in trouble
e. in trouble and liable to end soon.
f. an apparently important person in an unimportant situation
g. really difficult
h. to exaggerate the importance of something
i. to lose sight of the overall situation because you are concentrating on the details


(Keep in mind that Amazon will often have both used and new copies of books you want at much cheaper prices than those advertised here. Click on the image to check.)