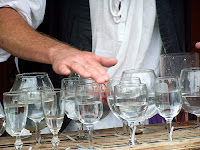 In the final part of this article, I shall be talking about activities which you can use to help students pronounce individual sounds which are a problem for them. However, all the practice activities in the world will be useless if the students don’t understand how to produce the sound in the first place. It’s therefore essential that the teacher knows and can explain this.

A list of the phonemes of English was given at the beginning of the first part of the article. They divide into consonants and vowels. What’s the difference?

A consonant sound is produced by blocking or obstructing the path of the air in some way as it passes out from the lungs. Try any of the consonant sounds – for example /p/ /f/ /t/ /g/ - and you’ll feel that in each case two parts of the mouth are brought close together to prevent air passing straight out. Now try any of the vowel sounds and you’ll see that this doesn’t happen – the air flows straight through, unobstructed.

There may be several variables involved in vowel production, but the most important are :
Using these categories we can describe /i:/ as in meet as a close front spread vowel, while /u/ as in boot is close, back, rounded.

Consonant Sounds
Consonant sounds are also described using three variables – a) the use (or not) of voicing, b) the place of articulation, and c) the manner of articulation. What do these terms mean? In this article we’ll give a brief definition, and in the next a more detailed account.

a. VoicingHalf way down your larynx, behind your Adam’s apple, are the vocal cords – two bands of elastic muscle tissue which can vibrate as air from the lungs passes through them. Some sounds, known as voiced sounds involve vocal cord vibration whilst others, known as unvoiced sounds don’t. For example, place your fingers over your Adam’s apple and make a buzzing sound /zzzzzzzz/. You should feel the vocal cords vibrating. Now do the same with a hissing sound /sssssssss/ - the voicing disappears.All vowels are voiced, and over half the consonants. Try for yourself with some of the other sounds from the chart. Be careful though. If you add a vowel sound to an unvoiced consonant – for example if you say something like “ker” rather than just /k/, you’ll feel the voicing from the vowel.

b. Place of Articulation

The shape of the mouth, and the position of its different parts (mainly the tongue and lips) are also crucial to pronouncing the sound, and the second way of describing sounds reflects this. If you say the sounds /p/ and /b/ for example, you can easily feel that they are made using both lips. They are therefore called bilabial sounds. Or what about /f/ and /v/ ? They involve the use of one lip (the lower lip) and the teeth. They are therefore known as labio-dental sounds.
Add to this what we’ve already said about voicing, and we can distinguish between the sounds in each pair : /p/ is an unvoiced bilabial, /b/ a voiced bilabial; /f/ is an unvoiced labio-dental and /v/ a voiced labio-dental.

We’ve seen that /b/ is a voiced bilabial. Based on what we’ve seen so far, how would you classify /m/ ? try saying it in an extended form /mmmmm/.

/m/ is also a voiced bilabial – it’s made by vibrating the vocal cords and with both lips. To distinguish it from /b/ we therefore need a third category – a description of what happens to the air as it passes out from the lungs.

Try /b/ again. You should feel that the air is “stopped” – it builds up behind the closed lips for a moment, and then explodes out on release. Place your fingers in front of your mouth as you say it and you’ll feel it. The sound occurs on the moment of release. Because of this, /b/ is described as a plosive sound.

/m/, on the other hand, doesn’t release the air through the mouth at all, but through the nose. Say /mmmmmm/ again and put your fingers under your nostrils. Again, you’ll feel the air passing out. /m/ is therefore known as a nasal sound.


In the next part of the article we’ll look again at the final two categories – place and manner of articulation – to see how the other consonants of English are formed.

Photo provided under Creative Commons Licence by Stareja via flickr