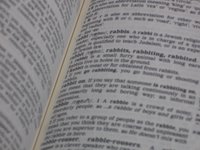 It is very unlikely that any of our learners will ever know all the words they need. English has an enormous number of words - on the Oxford University Press website they estimate it at a quarter of a million words. Even advanced learners, who may have more than sufficient productive vocabulary for their needs are unlikely to be able to read something like a newspaper feature article without finding a word that stymies them (and if you’re a non-native speaker who I’ve just stymied with the word stymy – it means block or confuse). And even native speakers are going to come across a vast number of words that they don’t fully understand – if you doubt this, take a look at Oxford’s Word of the Day. As I write, the word is chrominance. It’s a technical term, but don’t ask me the meaning because I didn’t even understand the explanation. From chrom I can deduce that it’s something to do with colour, but that’s as far as I got.

On the other hand, when we meet new words in context, the contextual clues often allow us to understand what the word means. What’s the word which I’ve represented by XXXX in the next sentence? We had forgotten to close the XXXX of the field, and the cows got out. No prizes for coming up with gate. Learners, however, frequently block when they meet a word like this which they don’t know. They reach for a dictionary, panic and lose the thread of what they were reading about.

As you’ve been reading this, you may have thought Yes, but I always ask my learners to guess unknown words. But notice that I’ve not used the word “guess” at all. You can’t guess the meaning of a word, you can only infer, or deduce, it. And to enable you to infer the meaning of the word, there have to be clear clues in the context. A lot of lessons go horribly wrong because the teacher asks students to “guess” the meanings of words without checking whether or not they are inferable. It’s easy enough to do. Take the word out and replace it with XXXX. Reading the sentence or paragraph now, is it clear what the missing word is, or are there various possibilities? What are the clues which point you towards the meaning?

Let’s take an example. I doubt whether many of you have ever come across the word bonxie, so that puts you in the same position as the learner if I use it. Now if you read it in this sentence - There were a lot of bonxies around this year - you are not much the wiser. You can work out that it’s a noun from the sentence and word structure, but there are no clues whatsoever as to the meaning. If this is all the information that the text contains, then there’s no way you can “guess”.

Here are some examples of extracts from authentic texts where I suggest it’s impossible to infer the meaning.
a)But as Professor Weeks points out, those characteristics are dangerously elastic: an "adventurous" company that fails suddenly becomes a "XXXXXX" company; a "bureaucratic" company that succeeds is seen as "disciplined".
b) The British talent for self-deprecation is well known; disciplined Japanese companies and XXXXXXXXX Americans may not appreciate the subtleties of the issue, he says.
c) To people who have just joined Nutzwerk, the friendly atmosphere is XXXXXXX.
If you want to check that there's really no extra informatiopn in the text that helps comprehension, you'll find extracts a and b here, and extract c here.
You can probably work out from the sentence structure that they are all adjectives – and that in the first example that it’s probably disparaging, but I suspect that’s as far as you can get. Of course, you can easily fill in the gap with a word that fits – for example in the last extract stimulating would be fine. But that doesn’t mean that that’s the correct meaning. It could just as easily be disconcerting, which changes the meaning completely.

So when you’re analysing a text prior to using it in the classroom, that’s your first question : of the words which the students are unlikely to know, which are and which aren’t inferable? Once you’ve decided which aren’t, you then have to decide what to do with them.

Your answer will probably depend on another question : how important is the word for an overall understanding of the writer’s meaning? In example b for example it probably isn’t. You can understand the writer’s point without knowing exactly what he thinks of Americans. But in example c it’s much more important. Because both derogatory and positive adjectives would fit, it’s not possible to understand what the writer is trying to say without understanding the word.

This type of word – unknown, uninferable but important to the text needs to be dealt with in a different way, which we’ll look at in the continuation of this post tomorrow - and I’ll also tell you what bonxies really are :)