Teaching Numbers and the Time - A Game 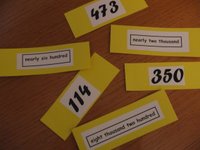 Numbers are often problematic for both beginner and higher level learners, and students need regular and ample chance to practise them. Low numbers are generally brought into beginners courses quite early on, but even these create difficulties. They may have difficulty remembering the way three changes to thir- in thirteen and thirty, and similarly five to fif-. Or problems with pronunciation and stress patterns may lead to them confusing thirteen fourteen, thirty and forty. When high numbers are introduced, if they’re using British English, they’ll have problems remembering where to put the and : two thousand three hundred and twenty not two thousand and three hundred and twenty.

This activity aims to give students practice in pronouncing these numbers. You can adapt it to include only the numbers which the students have learnt up to that point, but I’ll describe it here using both low and very high numbers.

You need to make a series of cards with a number in figures (eg 10) on one side and in words (eg ten) on the other. The game can be played in pairs or in larger groups – six or seven is fine. The bigger the group the more cards you need on the table – aim for at at least ten per student.

The cards are laid out on the table number side up. In turn, each student chooses a card, says what s/he thinks will be on the other side, and then turns the card over. If s/he has said exactly what is written there, s/he keeps the card. If not, the card is turned back over and left on the table. The next student can’t choose the same card, but the student after that is free to do so if s/he wishes. At the end, the student with the most cards is the winner.

This seems simple, and with very low level students who are just learning the initial numbers it is best left like that. However, at a later stage it becomes more complex – what is written on the card is not always the exact number. For example, the student who sees 203 and says two hundred and three may turn the card over to find about two hundred. Some of the numbers will be exact, others approximations.

This has two advantages :

A Variation : Telling the Time

The game can also be used to practise expressing the time. By far the simplest way of expressing the time is to use the hour/minutes system - It’s ten twenty five. This is the system which I teach immediately to beginners. However, by the late elementary level they also need to understand the ten past two/twenty to twelve system (or the American equivalent). Once this has been presented and practised in isolation, the game can be used to integrate the two.

In this version, the cards have a clock showing the time on one side, and the written time on the other. But for eg 9.20, the card may say either it’s nine twenty or it’s twenty past nine. Times like 10.24 may be expressed as its ten twenty four, it’s twenty four minutes past ten or as it’s almost ten twenty five, it’s about twenty five past ten etc. The amount of uncertainty makes it very unlikely that the cards will be guessed first time, and vastly increases the amount of both receptive exposure and productive practice which the students receive.

For both variations of the game there are more approximating expressions which could be used. For numbers -nearly, almost, just over, just under, around, around about, approximately, coming up for, a bit more/less than, and for times nearly, almost, just gone, around, approximately, coming up for etc. It goes without saying that the exact number of possibilities should be geared to the level and ability of the students : too simple and it’s boring, but too difficult and it’s demotivating. It’s up to the teacher to decide how many different expressions to include – perhaps none at all for complete beginners, but a lot if you want to use the game as a remedial activity at intermediate level.