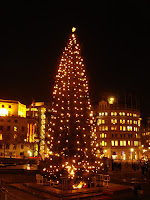 Looking for a "last lesson before Christmas" activity to use with your adult or teenage students? Try our Christmas quiz - which then turns into a webquest and presentation. Here are some questions which you could use from intermediate level up, with the answers below. To find out the background to the answers, just Google the key words - eg for question one - Christmas illegal Massachusetts. Or even better, get your learners to do it. If they've got smartphones with them, each learner can find out the background to one of the questions and then present it to the others.

1. Where was it once illegal to celebrate Christmas?
a. Scotland b. Massachusetts c. Bombay d. Yorkshire

3. The historical figure who inspired the Santa Claus myth is St. Nicholas. Where was he born?
a. Britain b. Germany c. Russia d. Turkey

7. What did Harry Potter get for Christmas the first year he was at Hogwarts School?
a. Nothing b. A magic potion c. An invisibility cloak d. Five pairs of socks

8. The Romans also had a mid-winter festival around the same time as Christmas is now celebrated. What was it called?
a. Invernalia b. Saturnalia c. Solstizia d. Winternia

9. Every year another nation gives a Christmas tree, which is placed in Trafalgar Square in London, to Britain. Which nation?
a. Canada b. Russia c. Finland d. Norway

10. Who was the author of the novel A Christmas Carol, in which a miserly old man called Scrooge is visited by the ghosts of Christmas?
a. Charles Dickens b. Jane Austen c. J.K. Rowling d. D.H. Lawrence

11. Where does Father Christmas live?
a. Iceland b. The South Pole c. Lapland d. Alaska

12. Which of the following is not the name of one of Father Christmas' reindeer?
a. Blitzen b. Prancer c. Rudolph d. Bobtail

Acknowledgement
Photo (of the 2014 tree in Trafalgar Square) provided under Creative Commons Licence by Click! via flickr