WILL and BE GOING TO : What's the Difference?

In a previous article on WILL, we saw that it is used express two notions - prediction (or deduction) and volition. But so is BE GOING TO :

So how do they differ ?

We saw in the other article that WILL is used to express predictions/deductions which are predominantly a mental concept, an idea of the speaker based on logical reasoning. So here, the idea I think we’ll probably win might be based on the reasoning : I know my team is fairly strong; I know the other team has three players unavailable through injury. Therefore I predict that we’ll probably win the match. It is because of this that will sometimes sounds odd if it’s used in isolation, without an expression like I expect, I reckon, probably which underlines the idea of the prediction as only an idea in the speaker’s mind.

BE GOING TO on the other hand is usually used to make predictions about events when there is some sort of concrete, external evidence for the prediction. The evidence may be visual Have you seen Juliet recently? It looks to me like she's going to have a baby. Or connected to any of the other senses : for example, on smelling the smell coming from the kitchen, I think we're going to have fish for dinner! The sentence in example 2 at the beginning of the article might be said during a match: the score is 2-0 to us, there’s only five minutes left, and we’re running rings round the other team. I therefore have concrete evidence for my prediction – it’s more than just my idea. 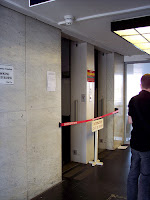 As we saw in the previous article, WILL can be used to express a willingness to act or decision that you want to act : A –The lift’s not working. B –OK, I’ll take the stairs. It is of course possible to predict someone’s willingness, so that WILL sometimes expresses both the notions of prediction/deduction and volition rolled into one – a sentence like I know she won’t do it could be glossed as I know she won’t be willing to do it.

BE GOING TO is used to report already formulated intentions: (We decided last night that) we're going to repaint the sitting room. It means We intend to ... or We're planning to ... if you chose to say I know she’s not going to do it the feeling of the sentence is that the person has already decided and you know that for a fact. In the sentence above with WILL, I know was used more in the sense of a strong opinion – I’m convinced that …

Notice again that although the event expressed by the infinitive is a future event, BE GOING TO is not a future form. Here, we are talking about present intention (We are going to ... / We are planning to). But it could also be past : We were going / We were planning to repaint the sitting room, but we've decided to sell the house instead. or any other form - I've been going to call you for ages.
So, to analyse the examples at the beginning of the article : 3. . ... we'll walk down ... This might be said in the following context .
A : I'm fed up. Let's go out.
B : It's raining at the moment but as soon as the weather clears up we'll walk down to the beach and go for a swim.
Here B is making the decision as she speaks, whereas the next sentence -

4. We're going to walk down to the beach

is something you and another person have already decided, and you're now telling a third person.

Photo provided under Creative Commons Licence by iwouldstay via flickr


For some great teaching ideas...