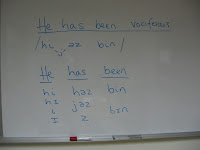 In two previous articles I looked firstly at the problems students have when listening to spoken English, and secondly at two approaches to processing the spoken word : top-down and bottom up listening. Briefly, bottom-up processing involves decoding sounds to understand words, words to understand phrases and so on, while top-down processing means interpreting the text in the light of background knowledge – whether of the world or of the language – in order to decide meaning, but if these terms are new to you I suggest reading both previous articles before going on with this.

In the last article, I suggested that focusing exclusively on either a top-down or bottom-up approach was insufficient when teaching listening, and that listening lessons need to develop the students’ competence in both areas. Apart from anything else, listening generally involves using both approaches simultaneously, with each one compensating for the deficiencies of the other.

How might we do this in the classroom? In this article, I want to look at a possible structure for a listening lesson which draws on both approaches. To illustrate it I shall use a listening text which is available on the web and which you can, if you wish, use with your own classes. The text comes from ESL Podcards (1). It is a scripted monologue talking about the life of the actor, Sean Connery and would be suitable for a class from about FCE level up. I suggest you listen to it, without looking at the transcript, before reading on. As soon as you finish, note down a) anything which was going on in your mind, relative to understanding the text, as you listened, and b) what you remember of the information given.

Listening to the text without the transcript is an essential part of planning a listening lesson. Unless the text in question is on a topic which they know more about and understand better than you, students are unlikely to be able to retain any more of the text than you are. You therefore need to identify what and how much this is. Similarly, if something causes a comprehension problem for you, it is unrealistic to expect the students to understand it without help. If possible listen to the recording in the same room and using the same equipment as you will during the lesson – acoustics and equipment quality can seriously affect the intelligibility of any recording.

As I listened to the text, I found myself first of all focusing on particular facts which either I hadn’t known and which surprised me, or which I had known but had forgotten. These were the details that I remembered after the first listening. Even these however were hazy. Immediately after listening I told my son that Connery had won the Mr Universe competition, convinced that that was what I had heard.

As I listened, I also found myself consciously recognising that I hadn’t understood certain words immediately, but that when I heard the following words I was backtracking to fill in the gap. This happened for example with the phrase And like in the first paragraph, which I initially decoded as unlike but then corrected as I heard the rest of the sentence. It happened again with the phrase he has been vociferous, where he has was an “acoustic blur” which I only actually decoded after hearing been vociferous. This is the type of item which you will only pick up if you listen to the recording before reading the tapescript, as once you "know" what is there, you will automatically "hear" it.

Once you’ve listened to the text and analysed it in this way, you can then listen again while you look at the transcript. This time you’re looking for items that may not have been a problem for you, but which you know might be for the students. This might be vocabulary items or structures which they don’t know, pronunciation features or any of the features of spoken English which were discussed in the first article.

As with any lesson, the activities you actually use will be determined by your objectives. Having listened to the text I decided that my skills objectives (2) for this text would be:

a) use prediction of content to aid their gist understanding of the text.
b) practise extracting detailed information from the text.
c) improve their ability to understand various features of pronunciation such as weak forms, elision and assimilation.
The first part of my lesson would focus would be Listening for Gist and would focus on the first aim. During the Gist Listening stage the student is encouraged to listen for overall understanding of the message of the text without necessarily retaining all the minor details, or being able to repeat back the exact words the speaker used.


At this point the students would seem to be at the same stage as I was after my initial listening to the recording. However, there is a difference. Whilst I may not have retained all the facts in the text, and while my memory may even have distorted those which I focused on, as a native speaker I certainly heard and understood all the other information which the tape contained at the moment of listening. Understanding and retention are two different processes, and need to be treated as such in the classroom. The next part of the lesson therefore aims to check if the students can actually understand the information given without asking them to retain it :
So far the lesson has focused on what the students can understand. In order to improve their listening ability, however, I would argue that we also need to focus on what they don’t understand, and improve their ability to recognise it the next time. I’m not here talking about structure or vocabulary which they’ve never met and therefore are unlikely to understand unless the text contains clear contextual clues as to the meaning (in which case inferring meaning from context would be a useful objective for a lesson using that text). But rather about words or structures which they have met, but simply failed to decode.

The text contains a number of examples of pronunciation features of connected speech such as weak forms and assimilation. Some of these, as a native speaker, I was able to decode immediately using a purely bottom-down approach because I expected them to be pronounced that way – in the case of most native speakers this is, of course, a non-conscious expectation. Two examples of this are the pronunciation of would have been with the weakening of both have and been and the assimilation in had to which changes the /d/ to a /t/ sound. For others, like the examples of and like and has been mentioned above, bottom-up decoding was insufficient even for me and I had to use a top-down approach – deciding what must have been there based on my recognition of what came next and my knowledge of the language.

Students need to be encouraged to use this top-down approach, but we can also help by ensuring that they recognise these pronunciation features so that they too are expecting them. The final part of the lesson focuses on this aim :
What about other features of the text that might cause problems, such as unknown vocabulary and structure? There are various items in this text which I wouldn’t necessarily expect students to know - undertaker, reservations, suave, tight, tall order, tuxedo, suggested that he audition etc. But none of them really blocks comprehension of the text and I have chosen here not to focus on them – indeed my tasks were designed so as to avoid them. Keep in mind that you can’t do everything every single time. Select the objectives which seem most important and design activities to focus on those.

However, by the end of the lesson many students want to have understood everything, and I would always finish by handing out the transcript and letting students listen again while they follow it. They would then have the chance to ask about the meaning of any words or expressions which they did not fully understand.

Notes
1. A note about the choice of the text. I was not, in this instance looking for authentic material – I’ll write another time about using authentic material in the classroom. My first reason for choosing this text was that it is freely available on the web and can be accessed by everyone – had I chosen a text from a coursebook, it would have been harder for those people not using that book to check what I was talking about. I also discarded anything from the web which is video-based as not everyone has a computer in the classroom – podcasts can either be listened to straight from the computer or downloaded – and which did not provide a transcript. For the purposes of this article, I would have preferred to use a dialogue than a monologue, but couldn’t find anything which met all those criteria. If you know of anything suitable, please leave a comment with the web address.
Notice also that this text has a primarily transactional purpose – its main aim is to convey information. The features which it contains are therefore different from those which would be contained in a text which was primarily interactional in intent – ie which focused mainly on establishing or promoting the relationship between the speakers.

The lesson described is therefore one which is suitable for a primarily transactional, audio-only, monologue. Change any of those parameters and both the objectives of the lesson and, consequently the activities used, might change.

2. When teaching listening, which can so easily cause demotivation for students, I think it is important that the teacher also builds affective objectives into each sequence of activities. These will affect not only what is done but, even more importantly, how it is done. Discussion of this aspect would, however, make this article too long and detract from the other points. I will therefore come back and analyses this lesson again, from this point of view, in a future article Do they need to understand every word? For now, bear in mind that the rationale for how the various stages are carried out will often lie in this area.

3. This type of bottom-up work can also usefully be done in dedicated phonology lessons and I will look at this in detail in the next article.
An ELT Notebook Recommends ...