Another Day in the Life of .....a Teacher in Extremadura, Spain

Here's another contribution to our occasional series Another day in the life of... Will Peach teaches in the town of Cáceres in western Spain. He is one of the site editors over at Gap Daemon, the gap year community website for backpackers and gap year travellers.

Can any day in TEFL truly be regarded as a “normal” day? The nature of the industry, its dependence on students of all shapes and sizes, motivations and intentions, means these days are usually rather hectic ones.
That chaos is no different here in Extremadura, Spain, where the sun coats the towns and cities, the arid landscape stretches on and some student, somewhere, struggles, his tongue in knots, with the tough pronunciation of those tricky English ordinals.
Describing a normal day here is about as easy as teaching me to dance the flamenco (talk about two left feet), or taming a wild, fuming, bull.
Escaping the London Grind
My story, however, needn’t dwell on my dance floor or bull-fighting shortcomings all that much. It began not so long ago, after having got out from under my London desk (having spent the last two years working 9-5), uprooting myself and relocating to a small city called Cáceres, close to the Portuguese border, just over a month and a half back.

Nowadays my life varies in this charming city and its resplendent old part, just as much as the wind blows. One day I’ll be heading for morning coffee on the terraces, another hotfooting it up to Spanish class, sometimes even rushing around topping up my income with a few private classes here and there.


But thanks to a TEFL position teaching in a tiny academy in the city suburb of Mejostillas, I have, with my schedule, a certain kind of stability. With that I don’t have to worry too much about private work drying up, too many morning cafes or funding those much-needed hours of private Spanish tuition!
Lessons can be tough, especially when facing a bunch of teenagers who have had their arms twisted to be there. Yet if I persist and lay down a consistent set of classroom management procedures I can usually get them going. Adults and young kids on the other hand are a dream and always come to class raring to go.
My teaching hours? I work from 4pm-10pm, Monday to Thursday, which means the first half of the week is spent preparing, teaching and, erm, stressing (but I’ll let you be the judge of that!), while the rest is spent enjoying a leisurely three-day weekend.
Mornings are Mine

Now your average English teacher, with such a late-starting schedule, would probably, more often than not, take as much advantage of those early lie in hours as possible right? Not me. I’m up at 6am every day for a brisk walk around the centre of the city (where I’m lucky to be renting a room in a shared apartment) before returning home for a bit of breakfast followed always by a lovely, mouth-watering, Spanish Magdalena (their fairy-cake like equivalent of a muffin). Or two!


These hours are when I’m at my most productive. This is when I can plan for the day ahead with a clear mind, usually perched on a bench in the park, browsing the course material and jotting down a few ideas before fleshing out a plan into something that little bit more concrete afterwards. More often that not I’ll strike up a conversation with one of the many abuelos too, those old yet amiable Spanish gentlemen, who relax in the park enjoying the early morning breeze. They usually have a few things to complain about!
After some early morning planning, exercise and breakfast I head for a coffee with my Spanish grammar and vocabulary books intent on knuckling down for a few hours and practising “la lengua”.
Easier said than done though. The trouble with this part of the world is that there are always so many distractions! Sampling delicious café delights, to chance meetings with people about town (Cáceres is a small city of about 90,000 people), means getting the work done can often be a challenge. Still I press on usually until about midday, just as this sleepy city begins to wind down and the shops begin to draw their shutters.
Siesta Time

Like many, more traditional parts of Spain, Caceres takes its siestas seriously. Most shops and services shut from around 1pm, when the sun is at its fiercest, only to draw back the curtains again a few hours later.


It can be annoying when you need to go out and do things. Even the library turfs out all its residents.
Yet if you can’t beat ‘em join up right?
That’s where I play catch-up with the early rise, returning home to my apartment, walking through the quietening town, arriving at my door with a happy “hola” for my “compañeros” and then retiring, at a gradual pace, to my bed for a lazy snooze.
It isn’t long before I’m up again, quickly fixing some food to sustain the coming 6 hours of teaching and then marching down to the bus stop for the five-minute ride to the residential neighbourhood where the school is.
Starting School 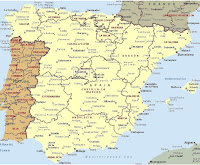 I usually arrive at school a little before the madness starts and the neighbourhood toddlers, kids and their parents wander into the little three-classroom building. This gives me enough time to write my goals on the board, layout the classroom and cast a quick glance over my lesson plans.
Then my Tuesday and Thursday first class of 7 rowdy 10-year-old boys shows up and the next hour and a half is spent trying to calm them down after heated competitive squabbles over which team won the most points during a game practising possessive adjectives. It wouldn’t be a problem but for the 3 Carlos’, whose names I usually have to shout from the back of the classroom.
The rest of the day however? That tiny bit easier. My other classes roll in, each an hour and a half at a time and involve taking energetic kids through their paces with the present simple and past, reading simple stories and putting new verbs into writing practice. Sometimes a lot of shouting.
At the end of the day however I enjoy a one-one class with a beginner-level adult called Sonia, who always has a smile on her face, despite the fact she’s been working like a Trojan from 8am in her day job!
As for my chaotic day, by the time it reaches 10pm and I’m heading back home on the bus, I can barely keep my eyes open. Thankfully my colleague is there to give me a quick-run through of her day, just as crazy as mine, save, of course, for her leisurely morning too.
Thursday nights however? Now there’s a feeling to be savoured. Roll on that relaxing three-day weekend. Recuperation is only four days away!