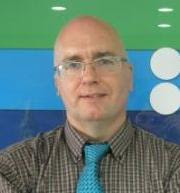 Another guest post from Lee Shutler. Until recently Lee has been working as an Academic Manager for the BC in . He is now teaching in East Kent in the and co-authoring on a Middle School textbook for the German market.

In a teaching generation so-called drilling seems to have shifted in its position on the EFL agenda. When I did my CTEFLA, drilling was considered part of the main menu in a lesson. Most modern CELTA courses seem to regard drilling as a side dish – to be consumed as part of the meal that leads students to learning and practice through tasks. Others go further and dismiss drilling as a relic of the bad old audio-lingualism days. However, I believe that like most EFL techniques, an eclectic approach is by far the best way to go.
I wish to write to defend and promote the drill as a way to increase students' confidence with language, as a way to engage students in the lesson and as a way to strengthen the bond between teacher and student. I base my ideas on me and my experiences – as a teacher and as a (frustrated) learner of language.
To be clear, for this article I wish to define a drill as an opportunity for students to practise a word or short chunk of language based on a stimulus. This stimulus could be a picture, a trigger word, a mime or repetition from the teacher. 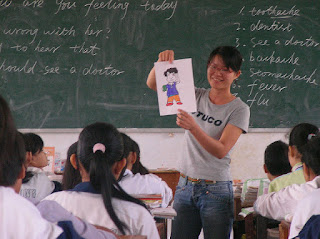 While I was living and working in , I was pleased to see that teachers here regard the drill as a core tool in their teaching – especially when teaching YLs. However I have used it in multi lingual classes in the where it has been met with surprise and enjoyment, both by the students in the class and by the teachers next door who tend to say something like “I haven't done that in ages”.


The benefits of drilling


A particular buzz topic at the moment is learner-autonomy – helping the student to help themselves. I agree. However, those of us who work in the private sector have to understand that the student has paid for us to help them first. Drilling helps to fit with this equation. The student will learn from your model and will build from it. In my case I am proud to say that there are now a number of students around the world who speak English with a hint of a Herefordshire accent!

Variations on the drill theme.
The most obvious and traditional drill is for the teacher to hold up the flashcard and say “It's a ...” which the students then repeat chorally.
But let's look at variations on this so as to keep the idea and the action fresh.
The couplet: This is a question and answer drill.
For example, to practise the form “think + will”
The teacher holds up a picture of a cinema and asks “What will you do at the weekend?”
Students respond “I think I’ll go to the cinema”
etc
The humanists (of which I regard myself as one) will argue that this is not real communication. To an extent I agree. However I do not believe we can have a completely top-down approach in the classroom – especially at lower, or younger, levels. We do need to have some bottom-up work in order to give the students the tools and the foundation they need for later work.
The direct approach: “Is it a ...?”
Again using flashcards, you hold up a picture of a cinema and ask “Is it a supermarket?” The students should respond with “No it isn't. It's a cinema” etc. With this drill you will need to pepper the activity with a few questions where the answer will be “Yes, it is.”
This works well with YLs because you can put a piece of paper at each end of the room – one with YES and one with NO on it. When you ask the question, they then run to the appropriate piece of paper and then give the response. 2 minutes of this will tire the children out nicely!
Drills for verb forms: You say one form, the students say another.
In this activity the target form is the one said by the student.
Teacher (holds up our cinema picture again): I am going to the cinema.
Students: Yesterday I went to the cinema.
Making language sound more natural: For example don't just drill “I will ... “ Drill “I think I'll ...” ,“ Maybe I'll ... “, “Perhaps I won't” etc 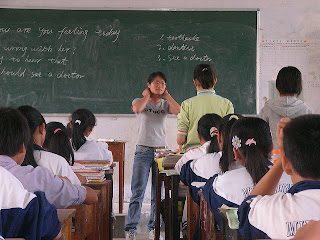 The silent drill: Not all drills needs to be shouted out at the top of students' voices. A short reflective time when the students can get their tongue around a word while whispering it or mumbling it to themselves can be a useful way of getting shy students confident with the target language. This can then develop into a more open drill. This is also a life-skill technique. when we are in a foreign country and we need to communicate something. we often rehearse it silently to ourselves before we approach the shop/ticket counter etc
The drill: In this drill, the teacher will say the target sentence once only. The student repeats and the teacher shows his/her feedback through gesture and nothing more until the student's performance is deemed accurate. The teacher will show this through a smile! With this drill approach, the student is very much at the centre of the classroom event.
Seeing the word: Conventional wisdom suggests that the target language should be drilled before the students sees or writes the words. From my own experience of trying to learn Korean, I felt more confident with the drilling process once I had seen the word. The word took on meaning as I was able not only to visualise the object but also to visualise the shape of the word in Hangeul (Korean script).
Indeed with classes where the Roman alphabet is not the alphabet of the mother tongue, drilling with the written word on the flashcard rather than the picture is a natural thing to do.
The order of the drill: Do we just drill a word and then move on? How about the two-steps-forward-one-step-back approach? This means that we don't just drill our pictures once and never again. We will maybe drill two or three new words, then go back to the first word, then go to the fourth word and so on. This will help with memory.
Communicative drilling
The above drills and ideas are based on the interaction between teacher and student. This need not always be the case. A questionnaire could be seen as a drill where the question is repeated frequently but where the answers will become freer language.
Ideal questions for this with lower levels could be:
How often do you...?
Have you got a/an...?
When did you last...?
Have you ever...?
How long have you...?
Do you like … ?
What’s your favourite …?
However I would still see these types of activities as the 'next stage'. I think these activities will work best when the target language has been drilled traditionally first.
How to drill
With YLs it is useful to have a variety of techniques on how to reveal the stimulus. Turning the card over slowly to reveal part of the word or picture increases anticipation within the class. Cognitive skills will come into play as the children make guesses before they get all the information they need.
Alternatively, have the cards placed around the room and the children have to follow you to the card. This is a good way to increase pace in a small class. Obviously, if you have 40 children in a room with fixed tables, this might not be a good idea. However, you may be able to use a corridor or a hall and have the pictures in there. This will allow you to exploit the space for running games as the children move into a more productive phase of the drilling / controlled practice stage
Powerpoint: if you have this facility, putting the stimuli on a powerpoint (or google docs) slide and varying the ways that slide can be revealed will again keep children interested and ‘alive’.
Useful yet perhaps unlikely sources
For flashards and games that focus on very controlled practice ,mes-english.com is a boon for teachers. The pictures themselves have a memorable comedy value that allows the image and meaning to stay with the learner.
An old course book called “Meaning Into Words” (Doff and Jones CUP 1983) must have been a tough book to use as a course book. However as a book to adapt and use as a source of functional drilling it still has a value.
A personal word
I enjoy drilling. I find it refreshing and the students find short bursts of it rewarding and useful. I don't advocate a return to audio lingual learning. However, as I say at the beginning, we live in an EFL world where an eclectic range of activities and approaches is open to us. Drilling should be seen as a useful part of that.
Acknowledgement
Photos are provided by Rex Pe under Creative Commons Licence, and can be found at :
http://www.flickr.com/photos/goldendragon613/sets/72157594295677848/with/250121409/