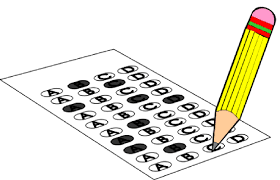 Discrete item (or discrete point) tests are tests which test one element of language at a time. For example, the following multiple choice item tests only the learner's knowledge of the correct past form of the verb sing :


They have the advantages of often being practical to administer and mark, and  objective  in terms of marking. However, they show only the learners ability to recognise or produce individual items - not how s/he would use the language in actual communication. In other words, they are  inevitably indirect tests - they provide evidence of the learners' ability to recognise or produce certain specific elements of the language, but do not demonstrate how  they might actually use them (or anything else) in communication. Learners’ abilities are inferred rather than demonstrated.

Integrative tests, on the other hand, may be either direct or indirect. The use of the term integrative indicates that they test more than one skill and/or item of knowledge at a time. Dictation is an integrative test, because it involves listening skills, writing skills, recognition  of specific language items, grammar (eg in order to distinguish whether /əv/ should be written as have or of) and so on. Dictation is still, however, an indirect test,

) “Whereas
discrete items attempt to test knowledge of language one bit at a time, integrativetests attempt to assess a learner's capacity to use many bits all at the same time, and possibly while exercisingseveral presumed components of a grammatical system, and perhaps more than one of the traditional skills oraspects of skills.

”
An example of a direct test which is also integrative might be role-playing a job interview, where the learners have to listen and understand the examiner's questions, choose the relevant grammar and lexis to express their ideas, speak with intelligible/accurate pronunciation and intonation etc. Other direct tests might include eg writing a letter of complaint; or reading and completing an application form.

These direct tests all demand that the learner integrates a variety of skills and items of linguistic knowledge to complete the test, and show how effectively the learner can use the language in communication. They have the disadvantage however, that they do not necessarily evidence knowledge of specific items - for instance, a learner might fail to produce a difficult structure by expressing the same concept in a different manner - eg I didn't know so I didn't go rather than If I had known I would have gone. With a direct test it is impossible to know whether the learners "avoided" the difficult structure because they had never met it or knew they would produce it inaccurately, or whether it was just by chance that they chose to say one thing rather than another. An indirect, discrete item test can, on the other hand, "push" the learner into demonstrating their knowledge (or lack of it) of chosen structure, lexis etc.

For this reason, many test batteries use a mixture of indirect tests and direct tests - each can balance the deficiencies of the other.

(Remember that Amazon will often have used copies of the books you want which are much cheaper than the advertised price. it's always worth checking.)