Who do they sit with ? 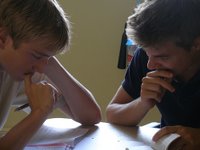 In the article Where do they sit? we looked at the advantages and disadvantages of seating students in different positions in the classrooms. However, once you have decided the general seating arrangement that you want to use for the class, or for an activity, you then need to decide who they sit with. Do you let them choose? Do you group at random?(1) For some groups and some activities this may work well, but just as the group dynamic can be affected by the seating pattern, the way the students are grouped, paired or just who they are sitting next to can determine the success or failure of an activity or a whole lesson. Here are some of the things which you need to take into consideration:

Friends, enemies and strangers : it would seem likely that if students are sitting with their friends they will be more relaxed and participate more fully in the class. However, it doesn’t always work that way. Sometimes they may know each other so well that in a discussion, for instance, there is simply nothing to say. Or they can sometimes be too disinhibited with each other, sending each other up or correcting each other sarcastically if they make a mistake. Similarly husbands and wives often need to be separated if they become hyper-critical of each other’s performance.

It can also sometimes happen that two students dislike each other or do not co-operate well. Whilst it seems obvious to keep them separated, this can also lead to them finding themselves on “opposing“ sides, for example in a debate, which only worsens the situation. We saw in the previous article that people antagonistic to each other will tend to sit opposite each other. Someone supportive of another person will often sit on his/her right (it’s not by chance that the language includes expressions like the opposition and a right-hand man). Try placing the antagonistic student on the right of the person s/he doesn’t get on with, and see if the situation improves. And in any case, avoid letting them sit opposite each other.

Strong students and weak students (2) : mixing ability levels within pairs and groups has the theoretical advantage that the stronger students can help the weaker ones. It can sometimes result, however, in the stronger ones taking over and the weaker students doing very little. On the other hand, grouping weak students with weak and strong with strong has the advantage that they can all work at their own pace, but means that the class will soon be out of lockstep. You can usefully use this type of grouping if you want students to work on different activities – to give a very simple example, after the presentation of enough used with adjectives and nouns, the students might be asked to work on exercises from Murphy’s Essential English Grammar Unit 90. But whilst the weaker groups work in pairs on the simpler exercises 1-3, the stronger ones will be asked to do the exercises 3-6. Whilst the strong students are working on exercise 3, the teacher can monitor the weaker students' progress with exs 1 and 2, and then leave them to help the stronger students with exs 4 and 5. At the end they can re-pair weak/strong and check their answers to ex 3 together.

Dominant and quieter students : Again, the risk of grouping a dominant student with quieter students is that the dominant student will take over. The first danger is that the dominant student will do all the work, controlling the discussion, giving all the answers etc. If you want or have to use this type of grouping, think carefully of how you can channel the student’s dominance positively. For example, in a discussion s/he might be asked to gather the opinions of the others in order to report back on the group. This ensures that s/he will bring the others into the discussion and make sure that they express their views. A second and equally important factor however, is that an uncooperative dominant student can sometimes ruin the whole group dynamic. I recently watched a class in which the students were divided into two groups. One group was working well – they were all on task, participating actively and obviously wanted to complete the activity. The other group consisted of two extremely quiet students and one dominant student who was extremely negative towards the lesson in general. She was constantly off-task, talking about other things or checking her phone messages, and actively prevented the other two students from doing any work. Had the teacher immediately rearranged the groups and swapped her with a more "positive" student from the first group, that student could have got the quieter students going on the task, whilst the other students from the first group would have probably been strong enough to involve the negative participant, or at least not be distracted by her.

There are various other factors that also need to be taken into consideration when forming groups, amongst them age, gender, first language, learning style and culture. As in the cases above, there is no necessarily right answer. Grouping by sameness may initially make the students feel happier, but over the long term may split the class into factions. Mixed groupings on the other hand may create their own problems.

To find the ideal mix, you’ll need to experiment. Try out different variations that you think might work, and see if they do. Notice the group dynamic which is forming and why, and arrange the seating and grouping patterns so as to maximise the positive effects. If something doesn’t work, change it – in the middle of an activity if necessary – until you are happy with the result. And be prepared for the fact that the next group may be different.

1. There are times, when the group is fairly homogeneous, when you may want to group students completely randomly. There are a number of ways you can do this, and I’ll write about some of them in a future article.
2. Strong and weak can refer to two distinct situations : a group where some students are more advanced than others, or a group where the students are all at the same level, but some are slower learners than others. For the moment I am not distinguishing between the two cases.

(Don't forget that Amazon often have both new and used copies of the books you want at prices lower than those advertised. It's always worth clicking on the link to check it out.)