Have Got : Part Two

How does that correspond to some of the most common occurrences of the structure in textbooks? Beginners courses often teach have got primarily in the context of family relationships, personal appearance and illness :

I’ve got two sisters.
I’ve got red hair.
I’ve got a headache.

All of these are slight extensions of the concept of possession. The last example is probably easiest to understand, especially if we change it to I’ve got a bad cold. This is equivalent to I’ve caught a bad cold. “Catching” an illness is how you “acquire” that illness, which brings us back to the idea of “obtain”. The present result of the past event (catching the cold) is that you now have a cold. English sees illness as something which you “possess”.

What about your sisters or your hair? How did you “obtain” them? Presumably from your parents when you or your sisters were born. Again, have or have got are being used to express a slightly extended sense of “possession”.

If have got is a present perfect form, why is it taught so early? It’s usually introduced way before any other examples of the present perfect, and hardly ever analysed from a grammatical point of view. The answer is undoubtedly because it occurs so frequently. It’s one of those expressions, like would like, which beginners are going to need immediately if they have any contact with native speakers. It’s therefore usually brought in early and taught as a set phrase, and as “meaning” have. This frequently results in learners seeing it as an idiosyncratic use of have, with a meaningless word attached and a grammatical pattern which doesn’t match the rules they’ve been taught for other verbs. In fact, I would argue that it frequently prevents them from understanding the “main verbs can’t form questions” rule which we are generally trying to teach at about the same time with the introduction of the present simple.

I think there are two things to consider here. Firstly, is it always necessary to introduce have got so early, before students are ready to understand the grammar and use of the present perfect. If they are not going to have immediate contact with native speakers, there is no real reason why it could not be held back. Secondly, even if it is introduced as a set phrase early on, once the students arrive at the "past event present result" use of the present perfect, by which time they will also have met the various uses of Get, why not recycle it and explain it more fully?

Practising Have Got – Two Christmas Activities

The following activities are designed to practice have got in a way which clearly brings out its equivalence with the idea of “have acquired”. They are intended as revision activities, and one is for use with adults while the other, simpler version, is for children. The version for adults is for lower intermediate level and incorporates the structure with other language which would be known at that level. (1)

a) Using the activity with adults or teenagers 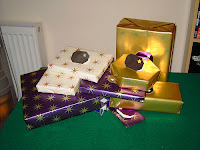 Before starting the activity , teach or revise exponents for making, accepting and rejecting suggestions. Divide the students into pairs and explain that they’re going to think of some Christmas presents for another pair of students.
Give each pair an envelope containing flashcards objects that the students might receive as Christmas presents, and which they already know how to say in English. Possible common objects include socks, a scarf, a necklace, a watch, a book, – but try to include objects that you know reflect the interests of specific students.

The students put the flashcards face down on the table and turn them over one by one. As they do so they discuss the suitability of the present for the students they have to give it to :

- A pair of socks. We could give them to Leena.
- They’re a bit boring. But it’s a possibility. Let’s see what’s next.
- A car! That’s a good idea.
- Yes, but she’s already got one, and it’s too expensive. What’s next?
- A book. How about giving the book to Davide.
- I don’t think that’s a good idea. It’s in French and he doesn’t speak French.

As each card is uncovered it’s left face up on the table. Once all the cards are uncovered the students make their final decision and wrap up the “present” in a small square of Christmas wrapping paper (prepare these in advance) and write on the front the name of the person it’s for and who it’s from.

The teacher distributes the “presents” and one at a time the students open them and say what they’ve got – I’ve got a telescope. It’s from Luc and Diego. Luc and Diego then explain why they chose the telescope – We gave Anton the telescope because we know he’s interested in astronomy.


b) Using the activity with younger learners

The activity for children is much simpler. The teacher tells each child the name of another in the class. Each child draws a present for that other child on a piece of card. The activity presumes that the children will already know the names of various toys etc, but the teacher can feed in any vocabulary which is necessary as they work.  They then wrap it up and label it as for the adult version. The teacher puts the presents in a Christmas stocking, pulls them out at random (or lets one of the children do it), and gives it to the child named. The children each say what they have got and who it's from.

Notes
(1) For another Christmas activity, for use with learners at a slightly higher level, click here.

Photo provided under creative Commons Licence by thickey via flickr