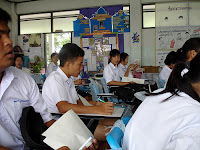 In the article Planning a Listening Lesson, I argued that listening involved both top-down and bottom-up (1) processing working simultaneously, and that we needed to focus on both when teaching listening. But given that, the lesson illustrated in the article remained decidedly top-heavy on the top-down side. Is there a place for greater focus on bottom-down processing skills?

and so on. As you can see, they tend to be phonological (3), and I would argue that it is in focusing systematically on phonology during the course that we can best teach bottom-up processing skills. In Planning a Listening Lesson I suggested that a focus can, and should, be built into the listening lesson – but it will inevitably remain non-systematic, dependent on what “comes up” in the listening texts chosen.

We also need a more systematic approach, based on our knowledge of the difficulties our learners have, which will be largely dependent on the differences between the phonological system of English and that of their first language (L1). For example, Arabic speakers will need to work on the distinction between /p/ and /b/, Finns will have difficulty with /g/ and /k/, Germans will tend to pronounce a final /d/ as /t/ or /v/ as /w/ and so on. Problems will also arise with stress and intonation – e.g. Italians will have difficulty recognising the meaning of contrastive stress. (4)

In teaching phonology, we need of course to deal with both receptive and productive aspects. Students need to reach a productive phonological level of at least intelligibility. But I am here concerned only with receptive aspects – whether they are able to recognise these features when listening, and therefore fully understand what is being said.

Once we know what our learners problems are liable to be, we can then look at our syllabus and analyse which items which we are teaching will bring up those problems. And a phonological focus can then be built into the lessons presenting, practising and recycling those items, or in some cases planned as an independent section of the lesson.

How might you integrate a receptive phonological focus into the lesson? Here’s one example, based on a problem encountered by Italian beginner students – distinguishing between numbers such as thirteen – thirty - fourteen – forty etc. The problem occurs firstly because of difficulty distinguishing between the –teen and –ty pairs and, at beginners level is often due to a failure to recognise differing stress patterns- thirTEEN versus THIRty, differing vowel length and the final consonant in the “teens”.

However, the problem is made worse by the fact that there is also confusion between thirteen/fourteen and thirty/forty. Italians tend to hear both initial consonants as /f/ and do not distinguish between the two vowel sounds. Therefore, an Italian hearing thirteen may equally well interpret it as thirty, fourteen or forty.

While numbers are being taught we therefore need to focus on these problems. For individual sounds, one technique that can be used is minimal pairs : students are asked to distinguish between two words which differ only in the target sounds – for instance, free and three. The words are listed in two columns on the board : column A has all the words with one sound - free, Finn, Fred, fort, roof – and column B those with the others – three, thin, thread, thought, Ruth. The teacher then says one word and the students have to decide if it comes from column A or B. If you want to take the activity on to the productive level, the roles are then reversed – a student says a word and the teacher identifies it.

The problem with minimal pair work is that it is often difficult to find pairs which are known to beginners, or even useful to them, and if less common words are used the lesson tends to degenerate into a long explanation of the meanings of fug and thug and so on. An alternative is therefore to use a list of words which contain the problem sound, and which the students already know or which are easily illustrated: think – thing – three – thin – thank – bath – thumb etc. The teacher says each word in turn, sometimes pronouncing them correctly and at other times substituting the problem sound - “fank”, for example. The students listen and say if each word is correct or incorrect.

To go back to our number problem, the minimal pair technique can also be used to focus on the stress difference in the complete number. The –teen numbers are put in column A and the –ty numbers in column B. The teacher again reads out one of each pair and the students identify the correct column. This can later be extended to four columns, A – thirteen B - thirty C – fourteen D – forty, asking the students to make the full distinctions using stress and phonemic cues simultaneously.

Further practice can be given with the target words incorporated into sentences. The students have a worksheet with multiple choice answers :

This last activity is, to all extents and purposes a targeted dictation. Traditional dictation went out of vogue for some time after the development of the communicative approach, and when it was brought back (5) tended to be top-down rather than bottom-up as in the traditional variety. However, bottom-up dictations can be useful when they are targeted to help students with one specific decoding problem – as here.

a) again at beginner level, students may have difficulty recognising the the difference between is and was, especially if the preceding pronoun is also weakened or the intrusive consonant /w/ is used before "is" to link two vowels. Sentences like ……………… in Rome for three days; Jo ………………… my best friend ; ……………………… very tired can be used, with the teacher saying at random he is or he was.

b) at a higher level, the same thing can be done to help students hear the weak form of have in sentences like She should have put it away. The activity uses various sentences which may be either she modal + infinitive or she modal + have done :
She should / should have put it away; It must /must have hurt a lot; She should /should have let me know; You should/ should have run home; They couldn’t /couldn’t have cut it up smaller; They can’t /can’t have shut the gate; They should/should have split the profits; It must /must have upset you.
For other features, different techniques are necessary. For contrastive stress, students can be asked to listen to a sentence and then choose the implied meaning. The sentence might be John can’t do it now and the choices a) … but he can do it later b) but Mary can. The correct answer will depend on whether the stressed word was John or now.

But what about traditional dictations where the teacher reads a passage and the students write it down? This can be useful as an occasional activity, if it’s used to revise some of the features which have previously been targeted individually. I generally use a short paragraph or dialogue which the students have already worked on earlier in the course and use a technique very similar to the one I described in Planning a Listening Lesson :
Some textbooks, for example Intermediate Express (6), do attempt to build in a systematic phonological focus into the course. However, textbooks have the disadvantage of being aimed at a very wide target audience. They will inevitably focus on the most widely experienced problems, but will tend to ignore those which are specific to only one or two language groups. They also only have time to focus on something once – whereas if it is a particular problem for the learners, it will need to be recycled regularly. It is only the teacher who can decide what the specific problems of his/her students are and ensure that activities are built in systematically to deal with them.

1. For an explanation of both these terms, see the article Teaching Listening : Top Down or Bottom Up?
2. For an explanation of all these terms, see the article Why Don't They Understand?
3. For an alternative list and references to follow up, see the site of the publishing company Abax
4. The site English Language Learning and Teaching contains an excellent summary of the phonological problems of many major language groups.
5. Davis and Rinvolucri Dictation : New Methods New Possibilities (CUP)
6. International Express (various levels) OUP

Photo provided under Creative Commons Licence by tilman via flickr


(Remember that Amazon often has used copies of the books you want at prices much cheaper than those advertised. it's always worth checking.)