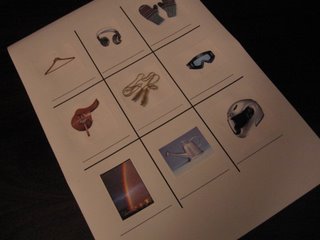 One of the most common complaints you hear from students when they're talking about their difficulties with English is I don't know enough vocabulary. At more advanced levels, the problem is mainly receptive - they have problems in understanding the words they come across in written texts or when speaking to native speakers. However, at lower levels the problem is also productive - they don't have enough words to express what they want to talk about.

Obviously we can, and should, deal with this problem by providing a systematic and progressive lexical component in our courses. But even so, we are unlikely to be able to predict, or cover, every word the student may wish to use. By lower intermediate level students need to learn how to explain their way around the words they don't know, asking for the word if they are speaking to a native speaker or simply explaining themselves : What do you call the little pieces of ice which fall out of the sky like rain? or It's the thing you use to connect the video and the TV.

The following game, based on noughts and crosses, is useful to practise this type of circumlocution, and would work with a class of up to about twelve students. It's played in teams, which gives the students the chance to work together on the definitions rather than having to think of them spontaneously. This helps the weaker students in the initial stages of learning to use the strategy.
If you have a large class, or when students have become more proficient at using circumlocution strategies, the activity can be done in another way. This version of the activity is more challenging as students are working individually. Each student has a copy of the worksheet, but also a card with one of the pictures and the name of that object. The students circulate, trying to find out the names of all the objects by asking other people What do you call the thing(s) which .... If they are asked about one of the objects which they don't yet know, they simply say I'm sorry, I don't know and move on. But if they know the name they give it. The game starts slowly, but as they get to know more and more names, they can also give more and more answers, and things speed up. It finishes when everyone has found out the names of all the objects.

1. If you can draw, the diagram can be put on the board instead of using handouts.