Even If and Even Though

Learners are often confused about when they should use even if and when they need to say even though. Look at the examples : what’s the difference? 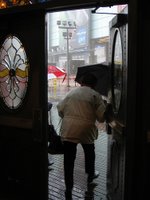 1a. I didn’t take the job, even though they offered me twice my current salary.
1b. I like my work, even though I have to work till nine thirty in the evening.
1c. He went out, even though it was still raining.

2a. I wouldn’t take the job even if they offered me twice my current salary.
2b. Don’t tell John I’m here, even if he says it’s urgent.
2c. I’m going out later, even if it’s still raining.

Even though introduces a fact – they offered me twice my salary, I have to work until 9.30 in the evening, it was still raining. It could be substituted by the expression despite the fact that. Logically, even though can never be used with future events, as the future is never factual.

Even if, on the other hand, usually introduces something which is not a fact. It may be completely hypothetical as in 2a , where the speaker doesn’t really think that they will offer her twice her salary, or just a possibility – maybe John will say it’s urgent or maybe he won’t; it might still be raining or it might not. It could be replaced in the sentence by whether or not.

Even if is sometimes used to replace even though when talking about factual events, with the meaning whether or not it's true or it doesn't make any difference if : Even if he's a Harvard professor, it doesn't mean he doesn't have to listen to other people's opinions. You might want to avoid this complication at first though, and present it only at an advanced level.

Once your learners have understood the basic difference through analysing sentences like 1a-c and 2a-c, give them a quick exercise like the following to check their understanding.

Choose an ending from sentences a-f for the beginning of each sentence 1-6, and combine them into a sentence by using even if or even though.

a. … I had a terrible headache.
b. … sales rise considerably in the next few months.
c. … I won the lottery.
d. … he’s the most senior person in the office.
e. … I had taken the earlier train.
f. … she had been drinking.

Photo provided under Creative Commons Licence by iirraa via flickr.