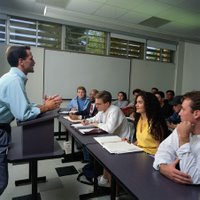 At one time teacher talking time (TTT) was seen as being inevitably counterproductive and something to be limited as much as possible. Why? There are five main arguments against it :

Is TTT always counterproductive however? In the second part of this article we’ll look at when it can be useful, and ways it can be used productively in the class.

1. For a more detailed analysis of classroom discourse, with references for the work of the researchers I have mentioned and many others, see this article by Moritoshi.