What’s black and white and read all over? Jeremy Taylor ’s graded readers.

Today’s guest writer, Jeremy Taylor, is a freelance writer and teacher trainer based in South West France. He has written over 40 books including many readers. If your students don’t read very much in English, read his article and perhaps you can convince them to start. 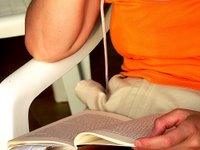 I love second-hand bookshops. Recently I was browsing through a French second-hand bookshop and came across a copy of Charles Dickens’ ‘Hard Times’. I opened it up and saw that someone had been using the book to improve his or her English. On each line there was one, or sometimes two, words underlined and a translation of that difficult word had been carefully written into the margin. This continued on page one – and half way down page two. After that there were no more carefully written translations. Did the student’s English dramatically improve? Or did the student simply give up? No prizes for guessing the correct answer.
It sounds obvious, but encourage your students to read something that they are capable of reading. They shouldn’t need a dictionary at their side. They need to select a book that is appropriate to their level. I have recently completed a series of readers which were based on a 40 (yes, forty!) word vocabulary. So there is something out there for even the very weakest of readers.

Join the SSS
SSS - Start with Simple Stories is a very simple idea, discussed in more detail by Furukawa Akio, a teacher in a school in Tokyo.

As an example of the benefits of SSS, I present exhibit A: Marzena, a 29 year old Polish woman who came to me last year. Her English was poor, I would say pre-intermediate, but her enthusiasm was great. We met once a week (she had no more time) for conversation practice, but she was also keen to read. Being a reader writer, I have a lot of readers at home. Marzena started on level 2 books. (Most series grade their books from 1-6). She read ten books a week. She is an avid reader in both French and Polish and the readers were only about 50 pages long. Each week she would tell me which ones she had enjoyed and which ones she hadn’t. She would then disappear with another ten titles. Very quickly, Marzena was reading level 3 books, then levels 4, 5 and 6. She also exhausted my supply of readers. I then weaned her onto ‘real’ books. Mark Hadden’s The Curious Incident of the Dog in the Night Time and Alexander McCall-Smith’s No 1 Ladies Detective Agency being some of her first.

Clearly Marzena is a smart student and her reading improved dramatically in about four months. What was very interesting was that her written and spoken English also improved. I could try and claim some of the credit as we had our weekly conversation class but far more realistically, Marzena benefited from being bombarded with ‘correct’ English. All those articles which are not present in Polish, were there, she couldn’t avoid them, she saw them hundreds of times on each page. And yes, Marzena incorporated those articles – and lots of other structures – into her everyday English.

Most students only have a few hours a week of English at most. Personally, I choose not to spend valuable classroom time getting my students to read books. However there are lots of students that don’t read very much in their own language, let alone English. How can you get them reading English books in their own time? Again, personally, I prefer to have extensive reading as a voluntary activity but there are plenty of activities that you can do to whet the appetite of your students. Here are a few to start you off.

The key is to get students reading for pleasure – and in doing so they will improve their English rather than forcing the students to read so that their English gets better. Lots of carrots, less sticks.

Jeremy's Books - including lots of readers.

Extensive Reading - a website dedicated to the promotion of readers.

Photo provided under Creative Commons Licence by luiginter, via flickr