Used to Do and Be Used to Doing

In this first article on used to, we look at the difference in meaning between the expressions used to do and be/get used to doing, and the problems which they often cause for learners.Students often get confused about the expression used to – or rather the expressions. The words used to are actually used in two different ways, and are different both grammatically and in terms of meaning. What are the problems which occur?
How can these problems be avoided? First of all, make sure that you introduce the two forms separately – bringing them both in together for the first time would inevitably cause confusion. However, most textbooks do this for you, presenting used to do at lower intermediate level and holding back be used to doing until later. During the initial presentation, make sure that students understand the difference in pronunciation from the verb use, and the fact that used to do is restricted to the past.

The main problem is probably that once used to do has been introduced, there is then insufficient recycling. The structure tends to be forgotten by the coursebook which moves on to other things. This is the stage at which the students start to say I use to play tennis on Fridays. They have remembered the structure, but it hasn’t been firmly enough fixed for them to remember the restrictions. If your coursebook is like this, you will need to add in more recycling activities.

Similarly, when be used to doing is introduced, used to do has often been “abandoned” by the course for some time. Again, students half remember it, and see the new structure as being related. And this leads to confusion with both. Make sure that used to do has been fully assimilated before you move on.

To ensure students understand that to in be used to is a preposition, bring the structure in first of all with nouns – you might use a context of someone who has moved to a new town or country saying things like I can’t get used to the weather / the traffic / the crowds. Later you can bring in examples with verbs – at that point they should have no problem understanding why the –ing form is used.

Once students are confident with the new form, should you bring them together ? I often do so by giving my students a list of sentences with the sort of mistakes which I’ve included in this article and asking them to correct them. If they are able to do so, it shows me that they have separated the two forms mentally, while if not, it gives me the chance for some remedial explanation. Alternatively or additionally I might give them pictures like the following and ask them to produce sentences using used to : She used to be very overweight; He’s not used to using chopsticks etc. 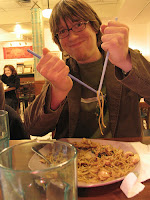 In the next article, Keith Taylor will suggest a way of presenting and practising used to do in the classroom.Notes
1. This is the explanation usually given and it explains most examples of the structure. But it is not necessarily true. I could say for instance : I’ve always ridden regularly. Even when I lived in the middle of London, I always used to ride regularly.

2. The use of the asterisk before the sentence is a convention used to indicate that the sentence contains an error.